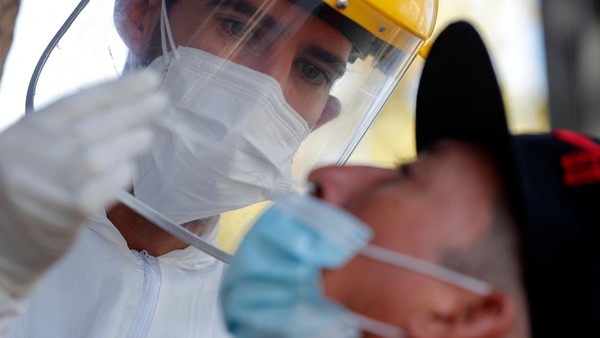 The contagious Omicron variant is shooting new cases in Chile, which this Thursday registered the record figure of 12,500 infections of coronavirus, well above the 10,000 infections that the Government forecast a week ago.

The Metropolitan region, which houses the capital and where 8 of the country’s 19 million inhabitants live, added 5,050 new cases, something that had not happened since June 2020, during the first months of the pandemic.

New infections thus increased nationwide 102% in one week and 354% in the last 14 days indicated the Ministry of Health.

The Tarapacá region (north) is the one with the highest incidence rate per 100,000 inhabitants, followed by the northern Antofagasta and Arica y Parinacota and the southern Magallanes, the ministry said.

The number of active cases also set a new record, with 67,512 patients who can currently spread the virus, while the national positivity rate hovered around 12%.

Hospital pressure, however, remains low -there are only 422 patients in intensive care-, as well as the mortality rate: 25 deaths were registered in the last 24 hours, which leaves the total balance since the start of the pandemic in 39,456 deaths.

Despite the explosive increase in cases, the Government is not considering new confinements, but the capacity reduction in the most affected regions and the promotion of vaccination.

This Monday, in addition, it announced that it is reducing the mandatory quarantine for those infected by covid-19 from ten to seven days given the evidence that omicron infections are milder and last less than other variants.

Immunocompromised people began to be vaccinated with the fourth dose last week, which will be followed by health workers on January 20 and those over 55 in February.

Mo Willems will publish a new “Paloma” book in September