New York, on the warpath for the use of chinstraps in schools 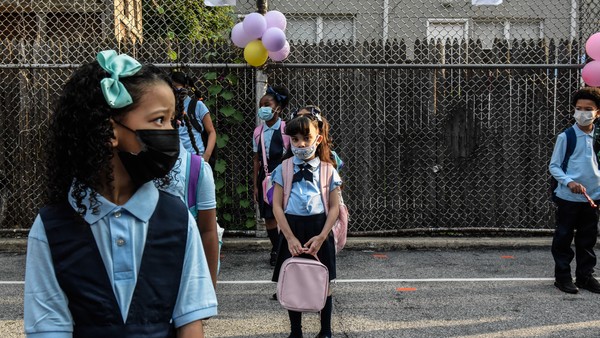 The schools of the state of New York were in the middle of a shootout between the Justice and the local government, after the authorities of the area of ​​education ask students and teachers to maintain the obligation to go to class with a face mask, flouting the ruling of a Long Island judge who had ruled against the measure.

The Department of Education said Tuesday that the state had given notice that it will appeal the decision issued last Monday by a judge on Long Island, which would allow keep the mandate in force until at least February 1, date on which the measure was going to expire anyway.

“As this legal process progresses, it is the position of the Department of Education that schools must continue to abide by the regulations on face masks,” said the spokeswoman for that agency, Emily DeSantis.

But nevertheless, some schools immediately made electives chinstraps for both teachers and students.

“While this decision will surely face legal challenges, until litigation yields contrary results, it will be optional to wear the mask for staff and students in Massapequa schools starting Tuesday, “the School District of Massapequa announced on its website. Massapequa, on Long Island.

The conflict arose from a lawsuit filed by a group of parents. Judge Thomas Rademaker ruled that neither the governor nor the state health commissioner had the authority to impose a mask mandate without prior approval from the legislature.

The mandate “is a law that was promulgated and applied illegally by an agency of the executive branch, and therefore it is annulled and impossible to implement, the judge declared.

In her reading, the governor no longer has the powers that were granted to the Executive during the pandemic. It is that in March the New York Assembly immediately suspended all executive prerogatives due to the pandemic that then Governor Andrew Cuomo had and that expired on April 30.

State Attorney General Letitia James announced that his office will appeal the ruling.

“We are appealing last night’s decision that blocked New York’s mask mandate. We will continue to use all of our power to protect New Yorkers from (hash)COVID19,” James wrote on his Twitter account Tuesday morning.

The state of New York had introduced in April 2020 a mandate that all inhabitants must have their masks on in closed spaces Except for your own home.

That mandate expired for those vaccinated in June 2021. Governor Kathy Hochul announced in December, when cases were rising in the state, that the mandate would be reintroduced for at least a month.

Omicron cases continue to decline. According to official data, hospitalizations have decreased in the state while positivity was 8.5% this Monday. The average of the last seven days had been 10%.

From Chiara Ferragni to Pierre Casiraghi: the look of the famous in the Dior parade

Emergency kits and a backpack: Ukrainians prepare to flee or resist

Emergency kits and a backpack: Ukrainians prepare to flee or resist