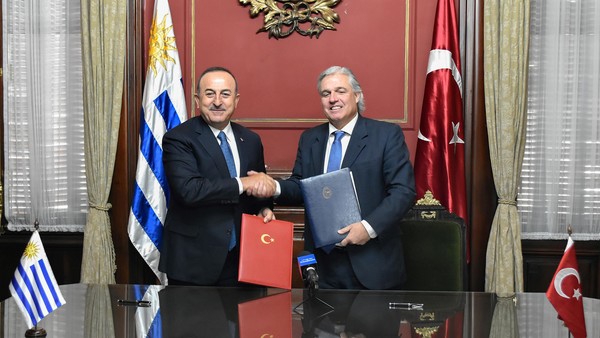 The Turkish Foreign Minister arrived this week to inaugurate his country’s embassy in Montevideo, but what was supposed to be a protocol visit almost ended in a diplomatic conflict over a gesture that the official made to a group of Armenians who were protesting his presence in Uruguay.

Mevlut Cavusoglu, the Turkish foreign minister, made a particular gesture with his hands that is associated with the Turkish ultra-nationalist Gray Wolves movement, as he walked past a group of Armenian protesters who were waiting for him at the exit of the inauguration of the Turkish embassy in Montevideo.

Given this situation, the Uruguayan Foreign Minister, Francisco Bustillo, decided this Saturday to summon the Turkish ambassador to Uruguay, Hüseyin Müftüoğlu, to the Estevez Palace for this Monday, the 25th.

The Armenian Cause Council of Uruguay, an organization that is dedicated to the defense of human rights and the strengthening of Armenia, uploaded the video showing the stunt gesture of the chancellor to its Twitter account, where it condemned the official’s action and qualified it from “shameful”.

They also lamented that the Uruguayan Foreign Ministry “shelters those who claim terrorism.”

the chancellor of #Turkey walks away making the gesture of the Turkish terrorist organization Gray Wolves to the Armenian protesters.
A shameful gesture that demonstrates the real purpose of this visit.
We regret that the @MRREE_Uruguay shelter those who claim terrorism. pic.twitter.com/DDAQ5dd8Gf

The Gray Wolves became known especially in the 1970s and 1980s, during violent actions against leftist militants.

The incident occurs hours before the anniversary of the Armenian genocide begins and Bustillos is scheduled to participate in events in Montevideo.

Uruguay recognizes the Armenian genocide, while Turkey recognizes massacres, but rejects the term genocide. Ankara speaks of a civil war in Anatolia to which was added a famine, a period in which between 300,000 and 500,000 Armenians and a similar number of Turks died.

Foreign Minister Mevlut Cavusoglu was received by Bustillo at the Palacio Santos, headquarters of the Uruguayan Foreign Ministry, to formally begin negotiations for a Free Trade Agreement (FTA) between the two countries.

As reported by the Uruguayan ministry in a statement, the ministers “held a working meeting held in a climate of friendship and mutual respect, during which the state of bilateral relations was reviewed.”

During the meeting this Saturday, both ministers signed the Agreement for the Promotion and Reciprocal Protection of Investments, “as an instrument of special importance to favor the development of business activities and the establishment of capital in productive enterprises that generate employment and trade for both countries “, was specified in a statement.

Social protest: how many pickets did social organizations and trade unionism so far in 2022