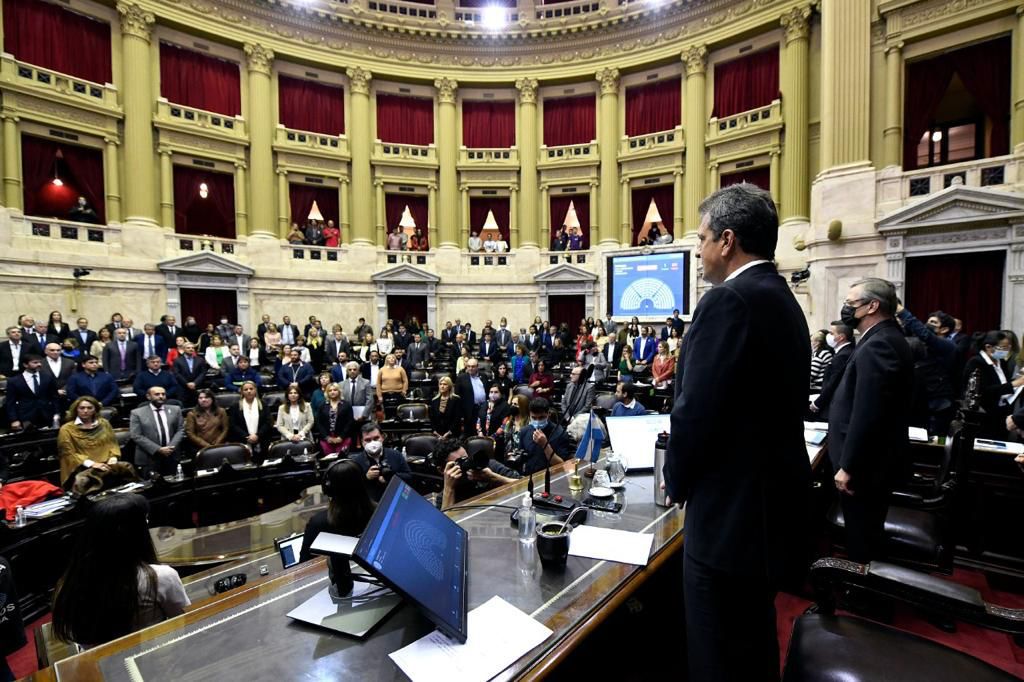 At the beginning of the session, the Single Voting Ballot initiative was debated, promoted from the opposition. The plenary session of the Chamber summoned the Commissions of Constitutional Affairs, Justice and Budget and Finance of the Chamber of Deputies to be constituted and begin to debate the change in the electoral system within a certain period. The motion was approved by a vote of 132 to 114.

Subsequently, the lower house gave medium sanction to the norm that represents a fiscal relief for the construction with 172 affirmative votes; 20 negatives and 45 abstentions.

The project, authored by the president of the body, Sergio Massa, and the head of the PRO block, Cristian Ritondo, establishes an extension on the terms of the law that seeks to promote the development or investment in real estate projects.

As a reporting member of the project, the deputy Mónica Litza, from the Front of Allexplained that it is proposed to restore Law 27,613 in the scope of the normalization of national and foreign currency holdings for public investment.

Litza also highlighted “the importance of construction in driving the economy, it acts as a great locomotive that drives other sectors of the economy.”

For her part, the deputy Victoria Morales Gorleri, of the PROconsidered that “in a country with a high level of poverty, we cannot fail to find tools that manage to reverse this situation”.

“It seemed very important to us to be able to give an extension to give a response, understanding the urgent need to reactivate the sector,” he alleged. At the same time, he considered that “the middle class and vulnerable people need to have a job opportunity and we need to increase the supply of housing.”

The Radical Evolution bloc announced that it would abstain, while Nicolás Del Caño, of the Left Front, He rejected the norm and criticized that “those who evade are rewarded.”

On the other hand, Deputies gave half sanction to the bill that declares of national public interest the comprehensive response to infection by the Human Immunodeficiency Virus -HIV-, Viral Hepatitis, Tuberculosis -TBC- and Sexually Transmitted Infections -UTS- and proposes the repeal of Law 23,798.

The project got 241 affirmative votes and 8 negative and will be turned over to the Senate. The rule seeks a comprehensive approach that provides support and information to end the discrimination and prejudice that the disease brings. It was supported by civil society organizations that were present in the boxes of the venue.

As a reporting member, the deputy Monica Fein (Socialist) He maintained that “HIV is a pandemic that has lasted for more than 40 years, that was not always in the public debate and that has claimed more than 36 million lives.”

“This law is a tool that comes to give a comprehensive look to advance on the path of reducing inequality, ending stigmatization and harassment, and saving lives.” she stressed.

As the author of the project, the deputy Ana Carolina Gaillard, from the Front of All, remarked that “this law, which saves lives, comes to propose a different paradigm, with a human rights approach and a comprehensive social approach to HIV.” “It is a disease that has generated stigma and discrimination, but with this rule we come to bring dignity,” he said.

From the Civic Coalition, Maximiliano Ferraro, spoke in favor saying: “I support this law in general and in particular because in the depths of my conviction I have the personal and collective hope that we deserve that day when the cure arrives.” .

The project establishes universal and free access to treatment, guaranteed by the public health system, social works and private health. In addition, it promotes the creation of a special retirement regime, of an exceptional nature for those who experience HIV and hepatitis B or C diseases, as well as a non-contributory pension for life, for those who are in a situation of social vulnerability.

Development of the Medical Cannabis industry

Lastly, it is also sanctioned the project by which the regulatory framework for the development of the Medicinal Cannabis and Industrial Hemp industry is created. It was for 155 affirmative votes, 56 negative and 19 abstentions.

As a reporting member, the deputy Mara Brawer (FdT)highlighted the properties of medicinal cannabis: “The whole plant is used, more than 25 thousand products are recognized in the world, that is why this law is so important, today a new industry is born in Argentina.”

He then explained the role of the Regulatory Agency for the Hemp and Medicinal Cannabis Industry (ARICCAME) that will be created by law. “The Agency is going to regulate, manage and supervise the entire production chain and coordinate with other State agencies,” he asserted.

Deputy Ricardo Buryaile (UCR) He said that “society asks us for empathy, we are not in the presence of the best project, but it is a step forward, we are betting on public health, on thousands of people who are going to improve their quality of life.” “The specific objective is the regulatory framework encompassing all stages of production, in no way are we contemplating recreational use,” he clarified.

The norm creates the normative framework for the production, national commercialization for export purposes of the cannabis plant, its seeds and its derivative products affected by medicinal use, including scientific research, and industrial use; promoting the development of the sectoral production chain.

Strong explosion in a building in Madrid: there are 17 injured and two missing

Neuquén detected a new case of acute hepatitis: he is a 4-year-old boy and his condition is delicate

Neuquén detected a new case of acute hepatitis: he is a 4-year-old boy and his condition is delicate