Peru sued Repsol for 4,500 million dollars for an oil spill 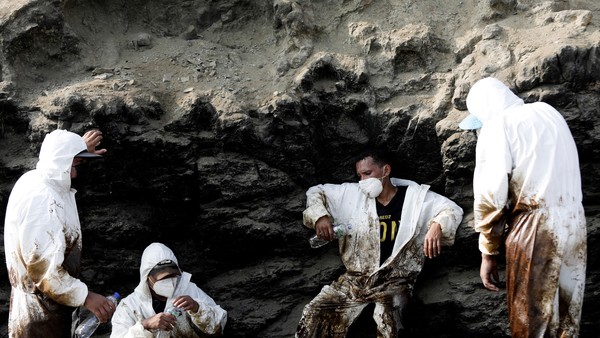 Four months after the environmental disaster caused by an oil spill in northern Peru, the government of that country filed a lawsuit against the Repsol company for $4.5 billion for the damage caused.

The measure was promoted by the National Institute for the Defense of Competition and the Protection of Intellectual Property (Indecopi) of Peru due to the pollution generated after the oil spill that occurred last January 15 in a refinery operated by the Spanish oil company and that affected twenty beaches on the Peruvian coast.

“We have filed this lawsuit in accordance with the rules of the Civil Code, which establishes that whoever operates a dangerous asset or by carrying out a dangerous activity, and causes damage to others, is obliged to compensate him,” stated the director of Indecopi, Julián Palacín, in a video released by the institution.

The oil spill, calculated in about 11,000 barrelsaffected 700,000 inhabitants and caused the closure of dozens of beaches, shops, restaurants and tourist services in the summer season, in addition to affecting fishing activity.

The fine is 3,000 million dollars for the damages caused, plus 1,500 million for moral damages to consumers, users and those affected, a figure that has to be defined by the judge at the time of resolving.

“The prejudice and moral damages suffered by the population of that area are protected by the rulings of the Inter-American Court of Human Rights,” Palacín said.

He concluded by announcing that this is the first case in Peru where an international oil company is being sued for civil liability in defense of the interests of the population, and stated that this could be “a unique jurisprudential precedent” in the country.

The Repsol crude oil spill occurred on January 15 of this year at the La Pampilla Refinery, some 20 kilometers from Lima, and was defined by the UN “as the worst ecological disaster in the country’s history.”

As reported by the company at the time, the accident occurred during the unloading process of the Italian-flagged “Mare Dorium” tanker, presumably due to the violence of the waves due to the volcanic eruption in tonga.

The Ministry of the Environment reported that the disaster affected about 100 kilometers of coastlinewhile the oil slick covered an area of ​​approximately 11.9 square kilometers between the sea and the coast.

Repsol indicated that the amount of crude oil spilled would have reached 10,396 barrels of oil (1.65 million liters), a figure notably higher than the 6,000 barrels that the company had initially reported and slightly less than the 11,900 barrels (1, 9 million liters) estimated by the Ministry of the Environment.

The La Pampilla Refinery has a processing capacity of 117,000 barrels per day, more than half of Peru’s total refining volume.

Repsol participates in that country in four exploration and production blocks for natural gas and associated liquids, with an extraction of 46,000 barrels of oil equivalent per day, which represents 12% of the country’s production and 7% of Repsol’s extraction, according to data from the Spanish company.

This includes the Camisea Consortium, whose gas field -the most important in Peru- has 14.3 TCF of reserves, and where Repsol has a 10% stake.

With information from agencies

They arrested a couple who starved their daughter: she weighed just 4 kilos

Unusual: a man suffered an overdose of vitamin D

Cake dye for pink cocaine: a gang adulterated the drug of consumption of electronic parties

Why herniated discs and yoga movements are compatible

Emily Lucius reappeared in public, but dodged the press