Tragedy in a bullring in Colombia: a box collapsed and four people died 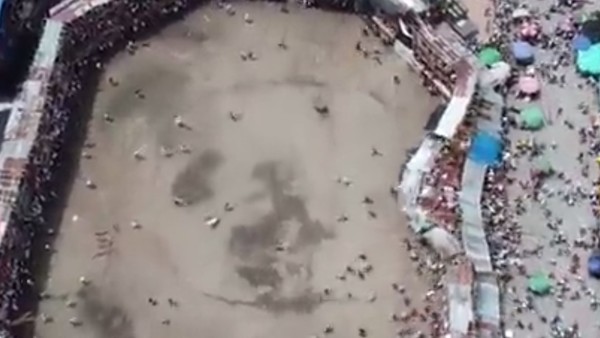 A shocking tragedy occurred this Sunday in the department of Tolima, Colombia, where Four people died and more than a dozen were injured. after a box collapsed in a bullring.

The fatal accident occurred in the municipality of El Espinal where a corralejaas popular festivals are known in which the protagonists are these animals.

There, one of the wooden stands that was full of people collapsed and collapsed: it fell towards the center of the place causing the death of two women, a man and a boyaccording to local authorities.

The whole moment was recorded in different videos that hours later went viral through social networks.

These show how the bullfighters were performing the show, which more than a hundred people had gone to see, when the box begins to destabilize.

It was a matter of seconds for the structure to come off and begin to wobble, falling to the middle of the square, where the animals were also loose.

In the short duration of the episode, desperate cries are heard from those who were watching the show from the stands. In addition, it is seen how the people who are below run quickly so as not to be crushed by the great columns.

Because of the terrible accident, the event was suspended and those present collaborated in removing those affected from under the wood until the firefighters and ambulances arrived and took charge of the operation.

I hope that all the people affected by the collapse of the Plaza de El Espinal can come out of their wounds unscathed.

This had already happened before in Sincelejo.

I ask the mayors not to authorize more shows with the death of people or animals. pic.twitter.com/dMAq6uqlKX

In this sense, it was the mayor of El Espinal who asked the rest of the public to evacuate the place.

“Deeply regretting what happened in our Gilberto Charry bullring, I want to ask the citizens who are in the bullring to please evacuate, the control agencies are already attending to the emergency and the wounded have already been evacuated to hospitals,” he wrote. Juan Carlos Tamayo.

Then, he added: “Among all of us, let’s help the relief agencies to do their job, we will carry out investigations into what happened,” he said.

Gustavo Petro’s request to the mayors after the tragedy

A week after being elected as president of Colombia, Gustavo Petro made a strong request to the mayors of the different departments of the country.

“I hope that all the people affected by the collapse of El Espinal square can get out of their wounds,” the president expressed solidarity on his Twitter account.

Attaching a video in which the collapse is seen from above, the president added: “This had already happened before in Sincelejo. I ask the mayors not to authorize more shows with the death of people or animals,” he asked.

Who is Mauricio Ríos, the host of the party in Mar del Plata in which a guest was killed

Racing vs Aldosivi LIVE, I followed the minute by minute of the match for the Professional League

Racing vs Aldosivi LIVE, I followed the minute by minute of the match for the Professional League